Weekend at the Spit I needed time away from the computer, so I did some hiking…in the city!  I seem to have rediscovered this place. Many, many years ago, before the ponds were put in and the walk in the Leslie Spit was pretty much a straight line to the lighthouse that marks the very end, I used to frequent here pretty regularly. But then, somehow, it became a place I liked to visit, but didn’t. This winter, it’s turned back into a place I seem to be visiting quite often. While my quest for a great Snowy Owl shot hasn’t paid off (yet!), my soul got some needed replenishing!

The Saturday was cloudy with sunny breaks. And, it was windy. Very windy. The trees, waves and ice in the water were so loud that even Porter Airlines was drowned out — and that’s a feat. I had to shoot with a high shutter speed to counteract the force of the wind on my camera. The highlight this day was seeing a pair of Sandhill Cranes.

Sunday was a colder day, but felt so much warmer. It was sunny, there wasn’t much in the way of wind and it was a perfect day to sit beside a pond and just enjoy the natural world. Unlike the previous day, the air was still and all the quiet sounds of nature were heard. 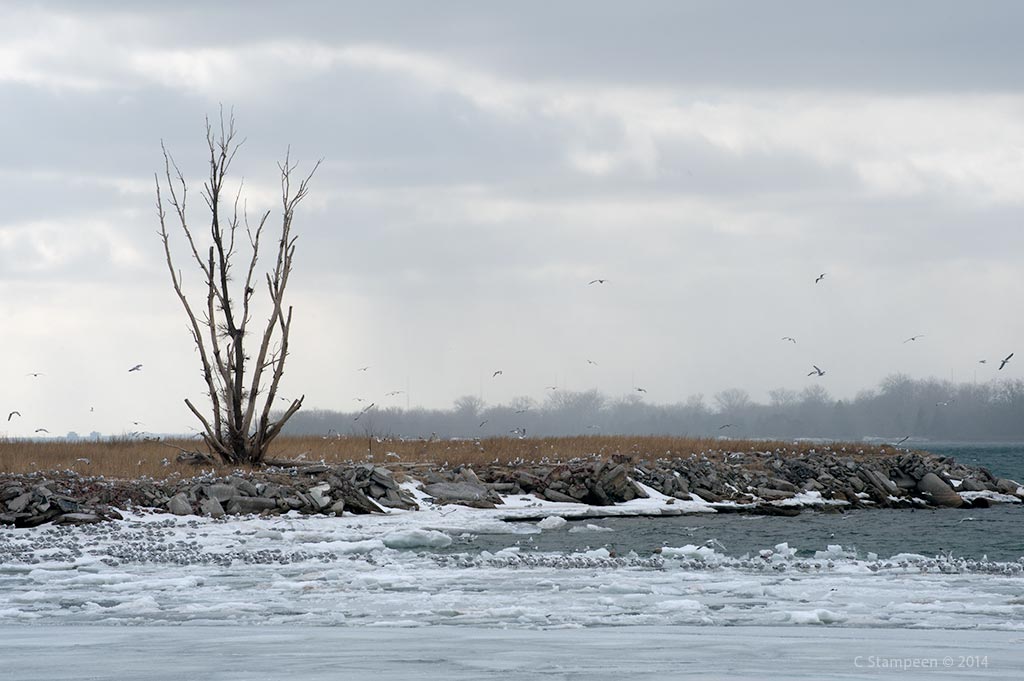 This part of the Spit is closed to humans from April to September so that birds can nest and raise their broods in peace. It does provide an amazing view of nature coexisting with the city. The backdrop to the rather desolute-looking scene here is the Toronto Islands – the cityscape is just to the right and off in the distance to the left, Hamilton is visible. The hazy look is due to a brief snow squall.

The natural world gave me a pretty spectacular day. A muskrat was swimming around the various holes in the ice, many times scaring the ducks as it popped up from under the ice. Other than the initial fright, the ducks and geese didn’t seem to mind the company. Later, I saw what seemed like a number of muskrats sitting somewhere on the ice. Turning to the right and back to the Spit, nesting trees are briefly lit up by the sun taking advantage of a brief break in the clouds. While the ice is receding, it’s still around to bring a wintery look to the scene. Gulls are sitting at the edge of the ice and are all around the shoreline here. The sound was something to be experienced. 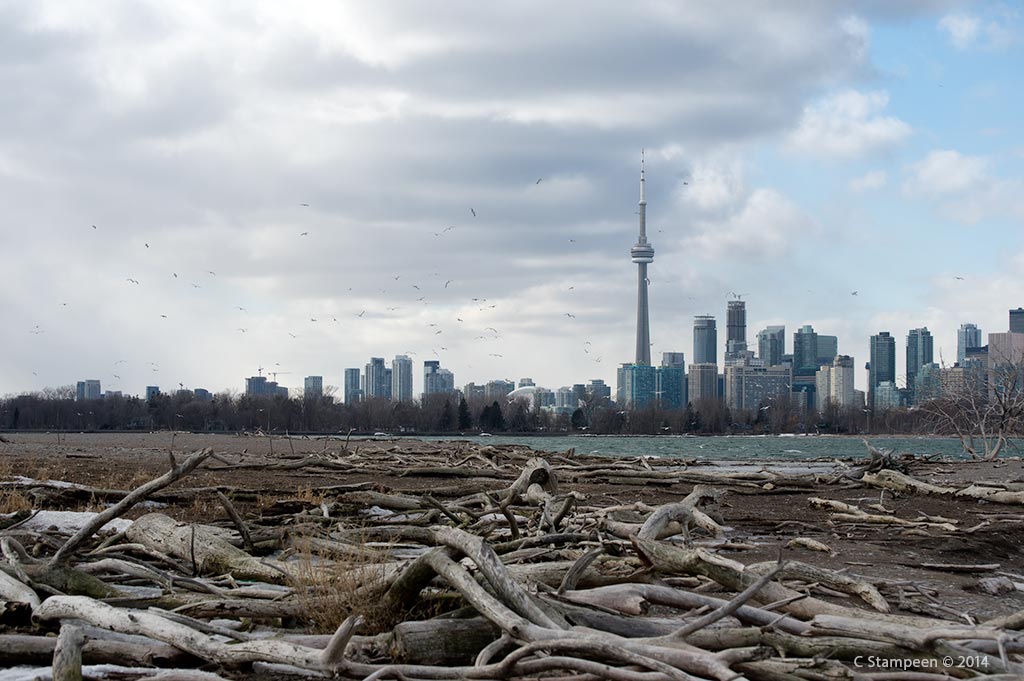 Driftwood on a desolate-looking beach makes an interesting foreground to the biggest city in Canada. The sun lit up a drab scene to show an amazing amount of colour.

As I sat and watched a muskrat come to the edge of a pool close to me, seeming to ponder if it would risk either getting out on the ice or trying for the free water along the shore directly to my left, I noticed a motion on the spit of land jutting into the other side of the pond. A Snowy Owl flew up to the top of some debris and perched there, surveying the world. It was too far away for the photo I still want to take, but now I was sitting right across from a Snowy Owl, with a muskrat staring at me and a variety of ducks flying over the ice and playing in the open pools of water. When I first saw these two birds standing on the ice, I thought they were herons. But as I got closer, something seemed off. Turns out they were Sandhill Cranes! Sadly, this was as close as I got before the birds decided that their feet were getting cold and took off.

Then I caught motion through some clear ice close to shore. It was a muskrat swimming underwater! Man, those things can hold their breath for a long time. There was no break in the ice anywhere along the shoreline in that direction, which apparently was an issue, and a few minutes later it swam back out towards the nearest free water in the middle of the pond.

I saw ripples on the still water next to me. A mink popped up. As it rested its front paws on the ice and pondered its next step, a muskrat popped up behind it and swam around  behind him, before pulling itself into a shallow area and seeming to sun itself contentedly. The mink ran up on shore, up and around the bank behind me, then, finally ran back down and across the ice, dove into the free water on the other side, scaring some ducks, then proceeded to play around the bank right around the Snowy Owl. The owl watched, but either it doesn’t like to mess with feisty minks or it just wasn’t hungry. The mink came across the ice a couple of times.  What a hoot to watch!

The world can be a crazy and unfriendly place at times, and it’s a gift to take some time to reconnect to the planet. The Leslie Spit is a wonderful place to do just that. 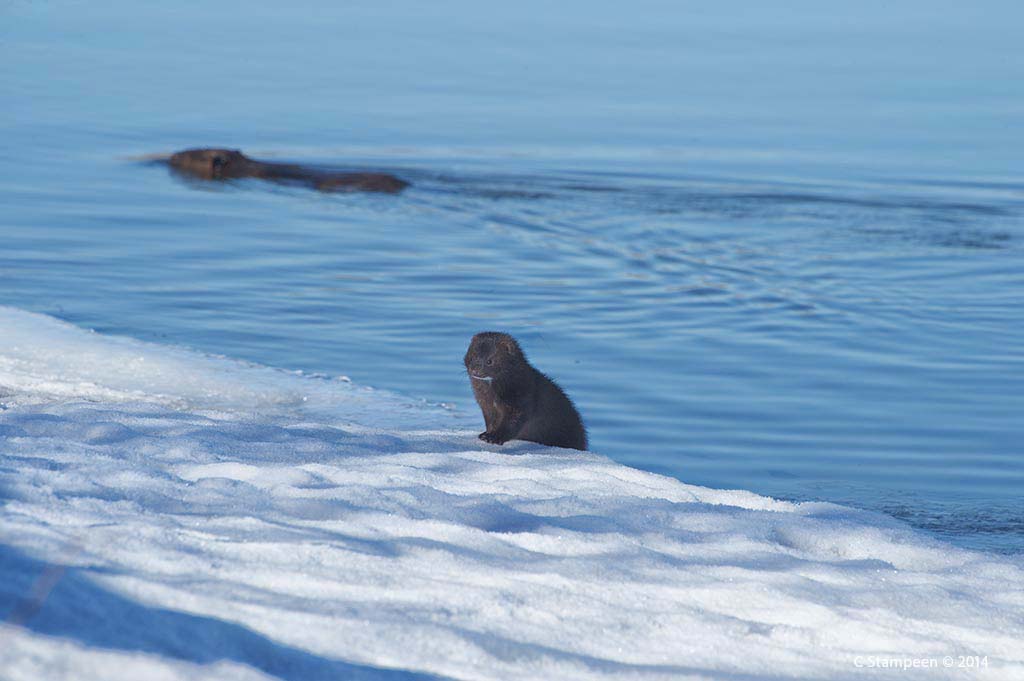 A mink pulls itself out of the water as a muskrat swims placidly in the background. An interesting fact is that apparently mink are big predators for muskrat. I wonder if they concentrate on the young, as this muskrat was quite a bit larger than the mink and didn’t seem concerned about the mink’s presence. But, I also wonder if my presence influenced any natural behaviour. A muskrat swimming underneath ice! I couldn’t change my camera settings fast enough to freeze the motion, but I still like the shot. 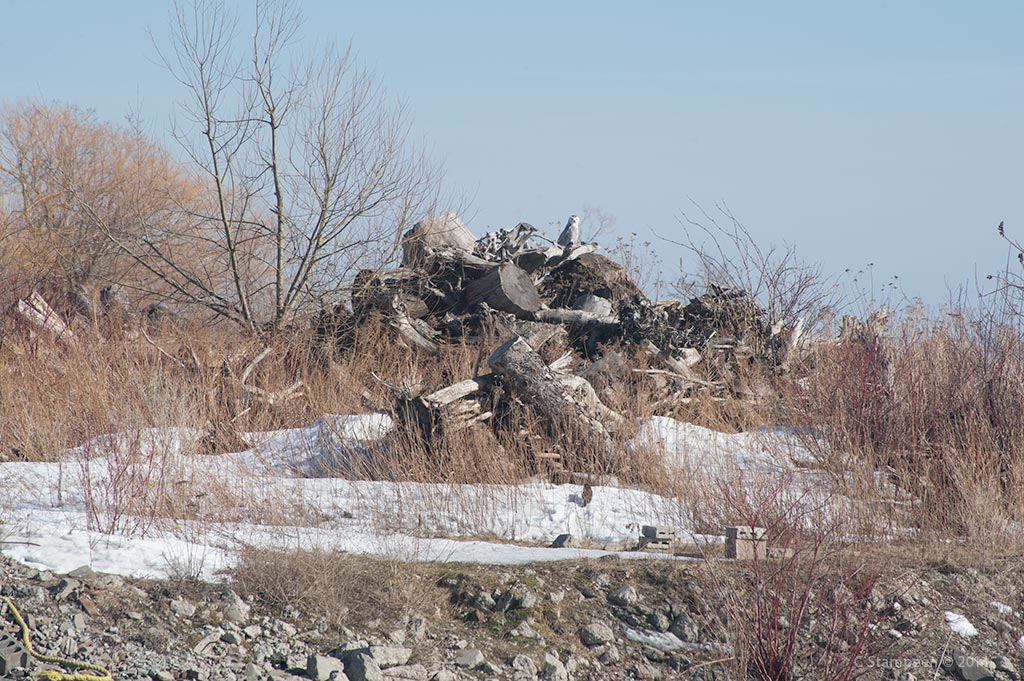 A Snowy Owl perches atop a pile of dead wood as a mink plays on the snow under it. The mink is directly under it and you can identify it by the brown thing in the snow with a shadow.

A muskrat suns itself on the ice as ducks swim around the pool of water. A closer view of the muskrat with a Common Goldeneye behind it. 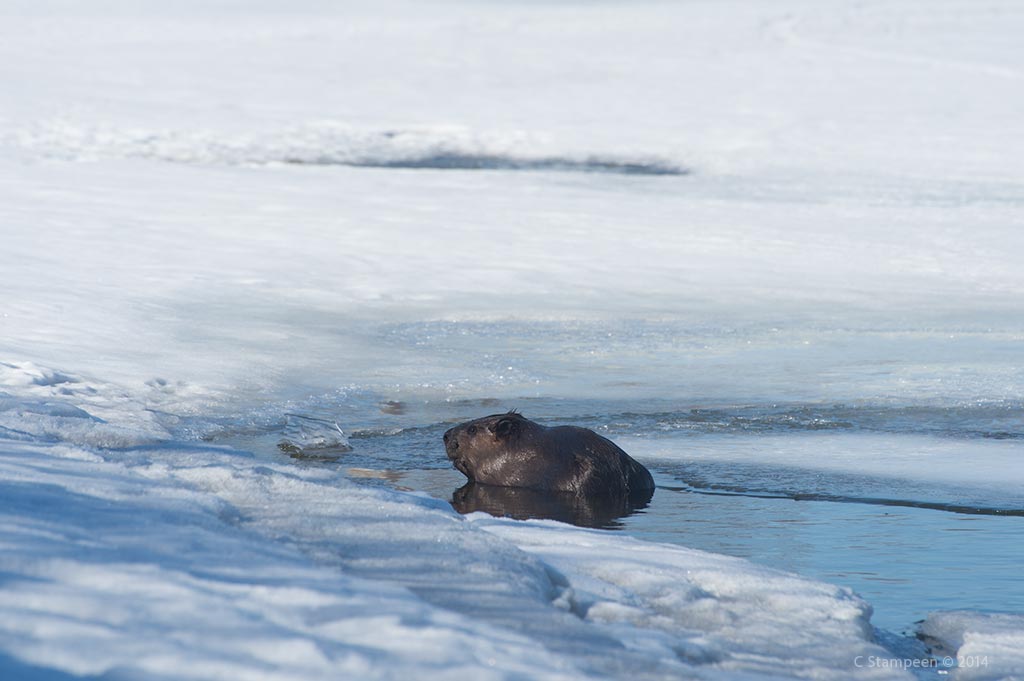 The muskrat suns itself close to shore. Maybe an ordinary scene, but I love the colour and texture. 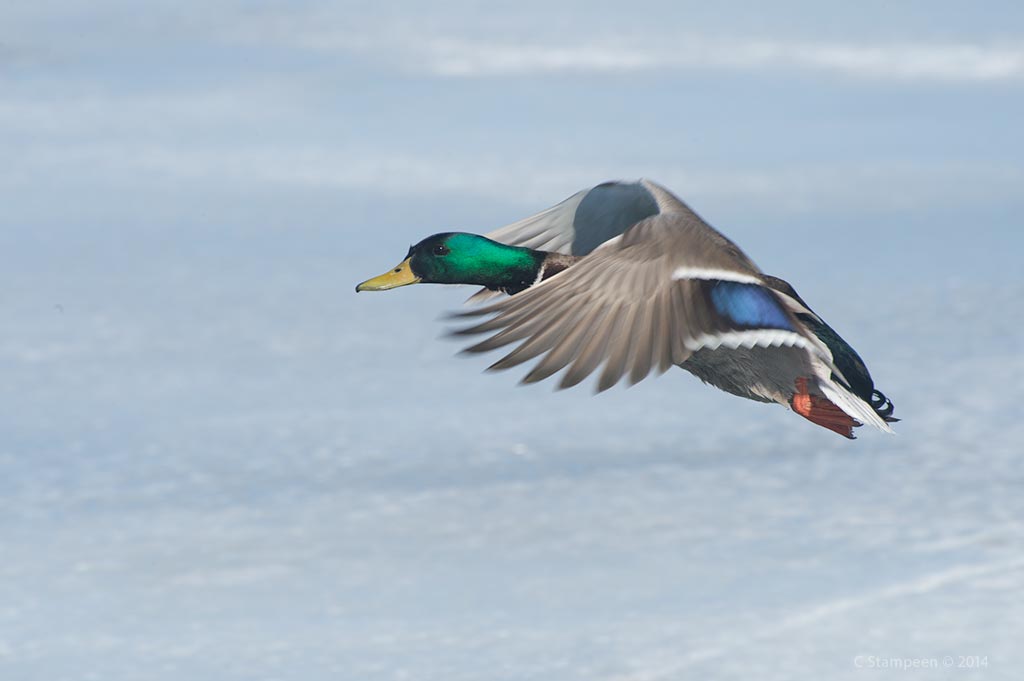 This mallard almost hovered for a second as it seemed to be waiting to be sure of what the female was going to do before he would commit to landing. 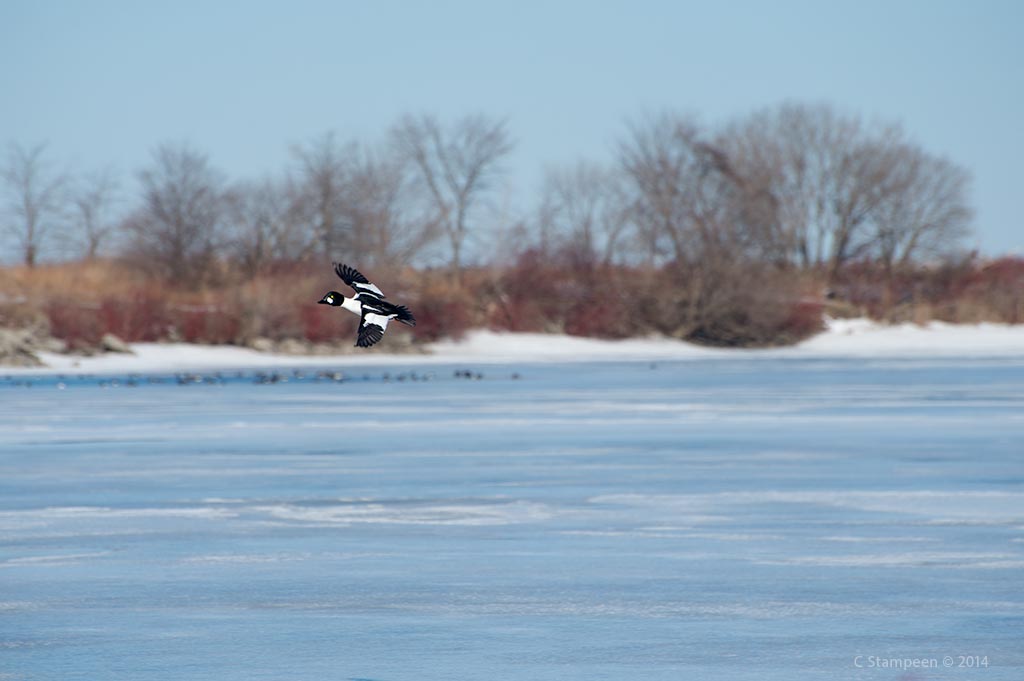 A Common Goldeneye flies by. I’ll miss the beauty of the ice when it melts, though the past weeks seem to have been harsh for the birds. This weekend, I saw at least half a dozen dead ducks on the ice. I hadn’t seen any in my previous visits here. This was the view I had walking into the Spit on Saturday. Soon this ice will be but a memory. Last year’s milkweed: spring is on its way and soon husks will be replaced with new growth.